MARCH 4, 2015 – Andrea and Charlie left last Thursday evening to drive part way to Salt Lake for his appointment Friday with the doctor who has been overseeing the bowel problem he’s had since he was a baby. They stayed at a motel in Pocatello and then drove the rest of the way the next morning and made it in time for Charlie’s appointment. The doctor changed some of his medications and wanted to see him again in a year.
Friday afternoon Lynn visited with one of our neighbors who is having a lot of problems this year with calf scours. Lynn came home and got some of the medication we use, and took it to John to try.
Our closest neighbor, Alfonzo, got back from Mexico (where he spends part of the winter) and put all his cows and bulls in the little field next to our heifers. We moved our heifers out of that field for a few days and locked them in a pen here by the house; we certainly don’t want one of those bulls coming through the fence to breed a heifer! These heifers are too young; we don’t want them bred this early even though some are already cycling. After Alfonzo took his herd up to the Gooch place this afternoon and sorted off the bulls and late-born fall calves to leave there, we were able to put our heifers back in their field.
On Sunday we brought our group of young cows down to the corral and gave the 2-year-olds (the ones that will be having their first calves next month) their booster vaccinations, so they will have adequate antibodies in their colostrum to protect their calves from scours.
Early Monday morning Lynn went to the hospital to have blood drawn for the fasting blood tests his doctor ordered. While he was there he also went to the ER to have a doctor check out the severe pain he’s been having in his upper leg and thigh. An x-ray showed that he has arthritis and bursitis in that hip joint, along with degenerative spine disease. The doctor put him on some medication to help reduce the inflammation that’s causing the pain.
Dani is staying home from school this week (she has severe respiratory problems, along with mononucleosis) so Andrea went to the school to get her homework for her to do at home. She’s been having recurring respiratory problems, aggravated by all the cigarette smoke at Mark’s house when the kids are there on his weekends.
Today Lynn, Andrea and I went to the funeral of a good friend. Diana was only 60 years old. She died suddenly, due to her diabetic condition. Her 2 sisters came—from Colorado and Alaska, and it was nice to be able to visit with them.

MARCH 11 – Dani stayed home from school for 2 weeks and did her work at home. Andrea took her to school several different days for short periods, so she could take her tests. When the kids went this past weekend to stay with their dad, Andrea gave Mark a choice; he could either let Dani stay home here, or Mark could sign a statement saying that he and his girlfriend would not smoke in the house. He chose to sign the statement. Andrea attached the medical discharge papers from the ER, which specifically stated that Dani must not be subjected to any cigarette smoke, with her breathing problems. When the kids got back home from the weekend with Mark, they reported that his girlfriend was furious with Mark for signing that statement.
On Saturday Michael took more straw bales up to the field for the cows. Andrea got a new battery for her car; the old one died. That evening we had my brother Rocky and family here for supper and had a great visit. They are enjoying being “home”, renting the little house at Baker, until their house is finished up on the upper place. As soon as the snow melts up there and the ground thaws out, construction will begin again. The foundation for the house was done last fall.
Our weather warmed up enough (not freezing so hard at nights). We were finally able to unplug the extension cord from the barn to the heifer’s water tank heater. We unplugged it for a few days a couple weeks ago and one cold night there was 2 inches of ice on the water! We had to get that all out, put in new water and use the heater again. Hopefully we won’t need it now.
On Monday Michael helped me fix a computer problem and loaded more big alfalfa bales on our feed truck—and brought 2 more bales around for the heifers. While he was moving the hay he noticed a bull down in the field below our heifers! It had come down the road from the Gooch place and gone in through Alfonzo’s open gate. So we quickly lured our heifers back into the pen next to their field, and locked them up again until Alfonzo gets that bull out of there.
That evening Andrea took Dani, Sammy and Charlie to talk with Pastor Stillman. They told him about their traumatic weekend at Mark’s house and how mean his girlfriend was to them, and that she was violently angry about the statement Mark signed, claiming that Andrea made up the ER document for Dani.
Yesterday our irrigation district (for Withington Creek) held the annual water meeting, to elect a new water master and figure out ways to correct/prevent some of the problems we’ve had. Several people’s weirs are not in good shape for proper measuring of their water and will need to be fixed. One neighbor who has only 5 acres but wants to run the whole show tried to convince everyone that he could cast a vote for Alfonzo’s landlord by proxy, until Carolyn pointed out the illegality of this—showing him where this was spelled out in the Idaho water law regulations handbook. There’s never a dull moment on this creek!
Lynn, Michael and Carolyn finished making copies of all the documents (kids’ medical records etc.) to Fed-Ex to Andrea’s lawyer as exhibits in her response to Mark’s petition for full custody of the kids.
Andrea and kids went to bed early last night then left in the wee hours this morning—to take Sam and Charlie to town at 4 a.m. to get on the school bus for their band trip. Then Andrea, Robbie and Dani drove to Idaho Falls (with Dani sleeping on the way) for her appointment with her pain doctor today, and then to drive to Ashton to hear the kids’ band concert in the evening. Kids from many schools came for this event, practicing together all afternoon for the evening concert. Charlie and Sam play trombone and trumpet. Andrea took a photo of each of them while they were preparing for the concert. 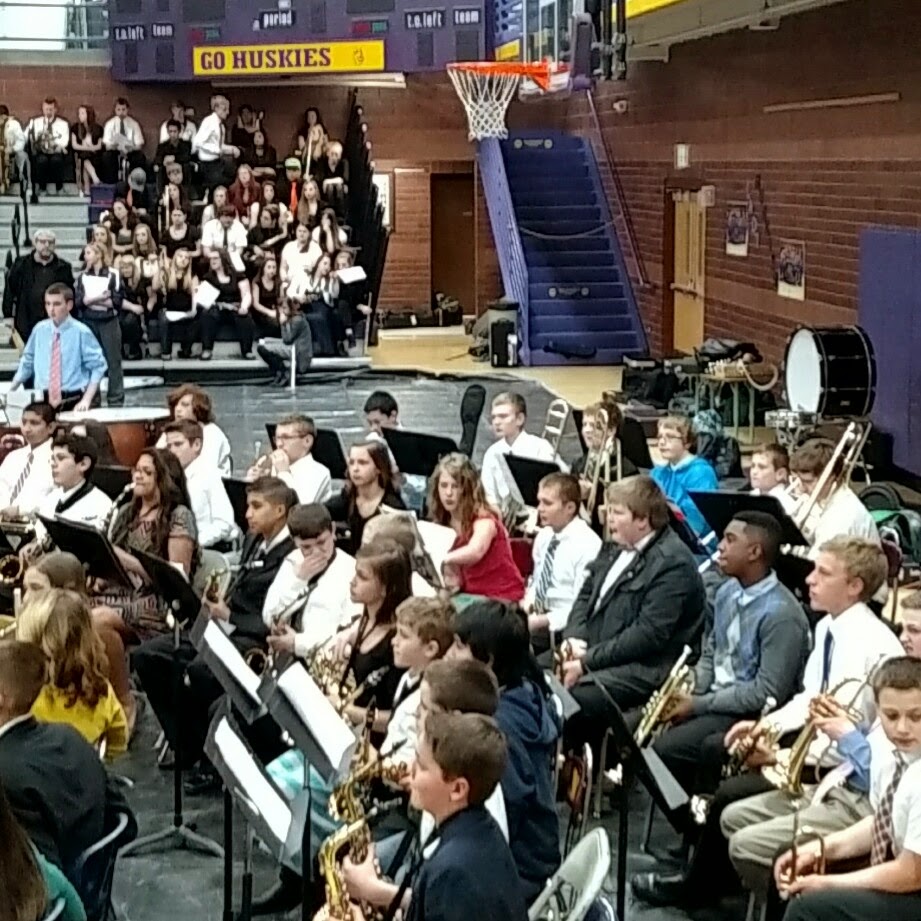 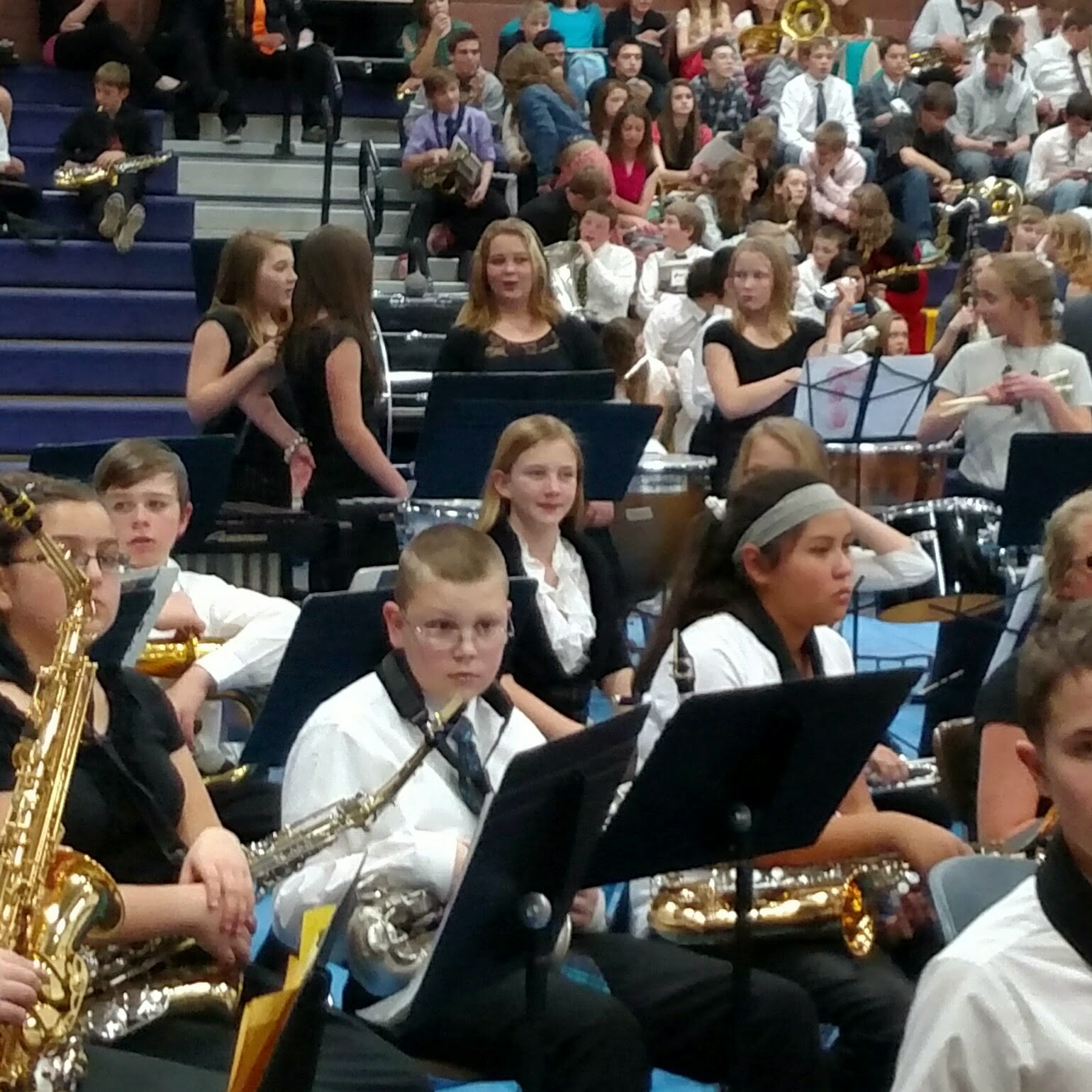 MARCH 19 – Young Heather is back from Canada (where she was visiting friends for a few weeks) and is training horses again, getting several ready for the big horse sale in April. She bought 5 dump truck loads of sand, delivered to her outdoor arena, and Michael borrowed our old disk to disk it up and make a nice, smooth surface. The old disk had 2 flat tires, and we had to get some other tires before he could take it 2 miles up the road to their place.
On Sunday Lynn checked on Roger and Sharon Solaas at Baker. Sharon broke her leg last week in 4 places and was life-flighted to the hospital in Idaho Falls for surgery to pin it back together. She’s home now but will be laid up in bed for 6 weeks.
Dani was finally well enough to start going back to school. She has gotten over the respiratory infection and now just has to be careful to not over-exert for awhile so she can get over the mononucleosis.
When I helped Lynn feed the cows Monday morning, Twinkle Twinkle (one of the 2-year-old pregnant heifers, named by Dani) didn’t come to the feed. She was a bit dull, and wasn’t interested in eating when I brought her down to the hay. After our windy weather, we suspected she might have pneumonia. Lynn and I brought that group down to the barnyard so we could sort her off, with a couple other young cows to keep her company so she wouldn’t be stressed at being by herself, and took the rest back up to the field.
Andrea came down from her house and helped us put Twinkle in the headcatch by the calving barn. She felt hot to the touch and was breathing fast, so I took her temperature and it was 105 degrees—which is very high for a cow. We gave her injections of antibiotic and Banamine (the latter to help reduce fever and inflammation). When we let her out of the headcatch she squirted out a huge amount of bloody diarrhea. We called our vet and asked his advice and he said that it would be hard to tell whether the diarrhea was caused by the high fever or the fever was caused by some kind of acute intestinal infection. He said to just wait and see if she improved or not, and if not, we might change medications.
So we put her and her two buddies in the main corral (moved the bulls to the back corral), where we’d have access to the squeeze chute if we needed to treat her again. There’s no way she’d want to go into the headcatch by the barn again, but we could easily put her down the alley to the squeeze chute if need be.
By afternoon the Banamine was working to reduce her fever. She was chewing her cud again, even though she didn’t want to eat anything. She was salt-hungry (probably from losing so much body fluid and electrolytes through the diarrhea). She was no worse by evening, and the next morning she was actually eating a little hay. So we moved her and her buddies to the big maternity pen by the house, where we could observe her better, and fed them some hay in there. She ate a little, off and on all day. Then it rained hard during the night and we were hoping this stress didn’t set her back in her recovery. 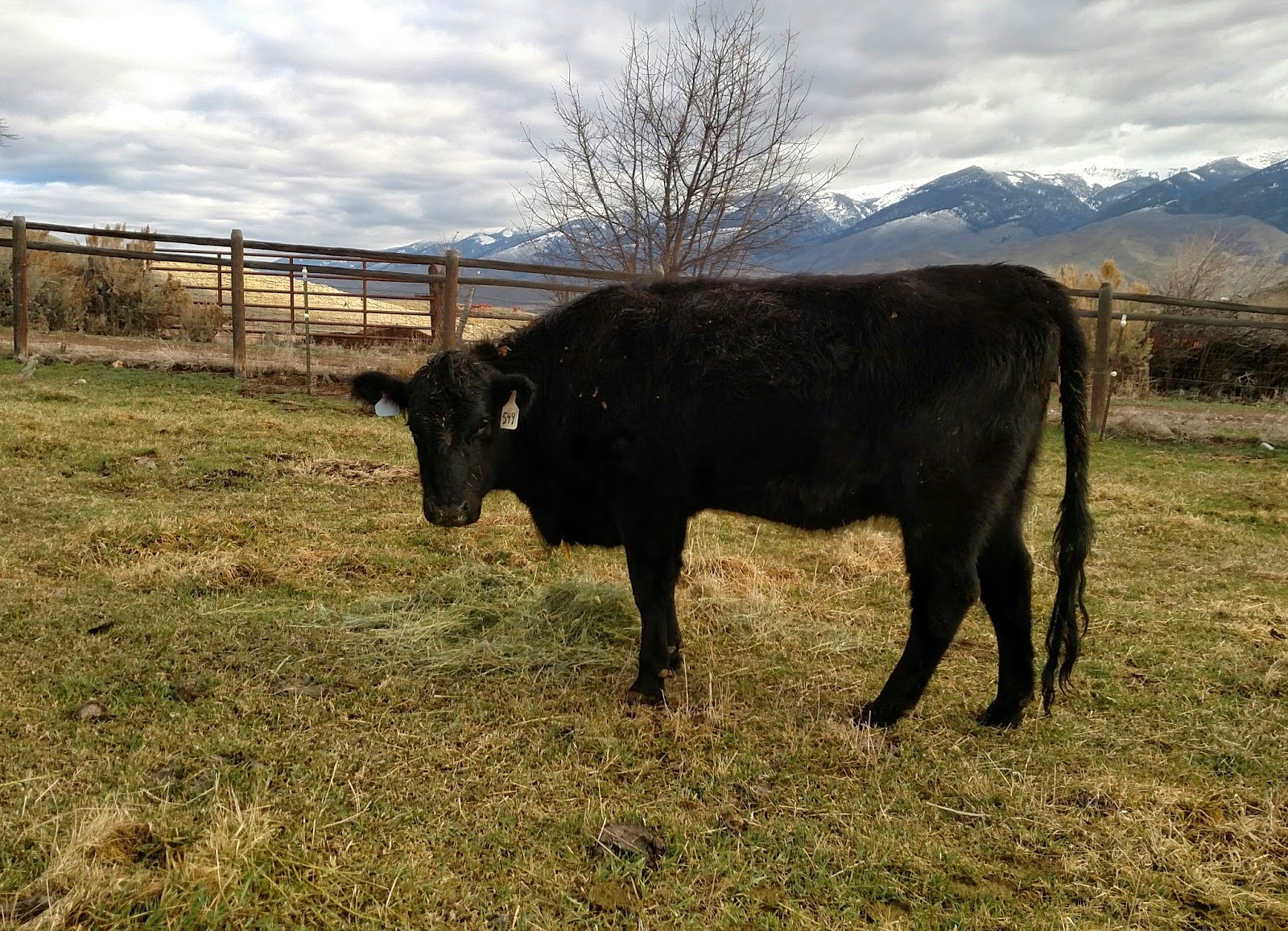 The next morning (yesterday) she seemed a bit dull again, so we took her and her buddies around the corral where we could put Twinkle down the chute. Her temperature this time was 104. Not as bad as it was on Monday, but still way too high. So we gave her more Banamine and injections of a long-acting antibiotic. Within an hour the Banamine was helping her feel better, and she was eating and drinking again.
This morning she is doing fairly well, but still not eating enough. We will have to monitor her progress and continue to treat her if necessary. We’re hoping that she will recover ok, and that she won’t abort her calf, which is due to be born in mid April.
Posted by BillieJohn at 12:48 PM No comments: 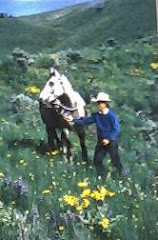 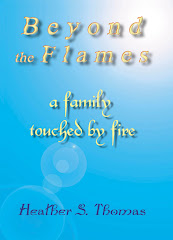